on January 08, 2013
What started to be a simple search on Trove has ended with possibly more questions than answers.

For many years I have known (or at least thought and was led to believe) that a member of our family, Samuel Mainwaring was aboard the Yongala when it sank of the Queensland coast during a cyclone in April 1911.


There are many news stories detailing the disappearance of the Yongala and all on board. With the benefits of searching via Trove I decided to see what else I could find out about Samuel Mainwaring and his voyage on the Yongala.

However, my research has left me a little confused.

My first find was a mention in The Zeehan and Dundas Herald.


My second find was a story told by a Mr Owen Thomas who had boarded the Yongala with Mainwaring in Sydney but decided not to continue past Brisbane.

He stated that the run from Sydney to Brisbane was one of the most enjoyable trips he had experienced.  The weather conditions could not have been more favourable, and the passengers were like a happy family.....One of the first men Mr Thomas met was Mr S Mainwaring, a well-known mining expert from Tasmania. He was journey north to Cairns in connection with a mining venture.

I now know why Samuel Mainwaring was aboard the Yongala. I always thought he was a long way from home.

The next mention of Sam begins to blur the picture. There appear to be two S Mainwarings.

The Sydney Morning Herald of 29th March states that Mr S Mainwaring was travelling on a single ticket to Cairns, and is described as a very old man. The Sam Mainwaring in our family was only 54 years old. This doesn't seem very old.

The final story is from The Brisbane Courier of 3rd April 1911. 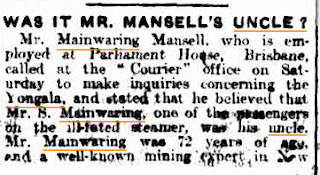 At the moment this is all I can discover. I'm sure it was our Sam Mainwaring who died as family members first told me the story. However, it has got me thinking especially as Sam has been described as a  very old man.

The will of Peter Laurie Reid (Mainwaring's father-in-law) states:
I bequeath to my daughter Louisa Alice Mainwaring the wife of Samuel Mainwaring of Zeehan in Tasmania Labourer.....