on January 17, 2013
I like to play with statistics. In a previous post Individual Arrivals in Australia I blogged about which previous generation arrived in Australia. This time I decided to look at States of arrival, the arrival numbers in each branch of our families and then whether the arrivals were single, couples or family group arrivals. The results are interesting. 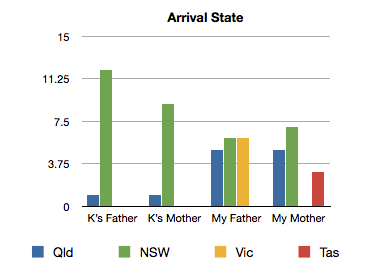 There is no real surprise here. My husband's families for generations come from an area about 1.5 hours from north to south mid way between Sydney and Brisbane. Most of them had land and were well settled. However, my families have tended to move around quite a lot and their State of Arrival patterns are more widespread.


The graph below show the number of individual arrivals in both my husbands and my families. This prompted me to look further at the type of arrivals. Did they arrive as single individuals, couples or as family groups? 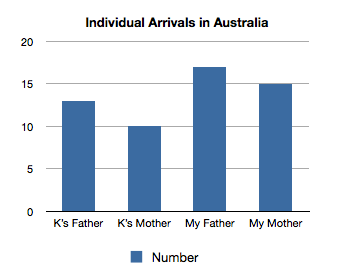 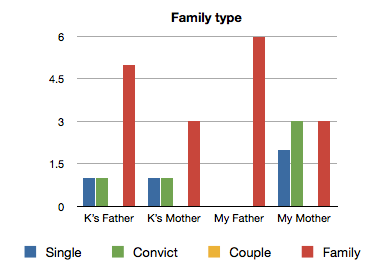 My father's branch is the only branch of our families that arrived as family units, parents with children. Two of the three convicts on my mother's side were married and their wives and children arrived later and are two of the three family groups. One of my mother's single arrivals may have been with a brother and sister but I can't find the shipping record.

One family group on my husband's mothers side arrived en masse with three generations of family members. There were also two orphan sisters and a widowed mother and daughter who arrived together (I've counted them as families). My husband's great grandfather started his trip from Ireland with a wife and two children. His wife died on the voyage and by the following year both his children had died. Not one of our families arrived as a couple without children.

What prompted them to move across to the other side of the world? Sent, reunited, seeking a better life, adventure, hope, fear, loneliness, discrimination, arguments, tragedy, love or war. The list could go on. For some we know, but for others it may never be known. 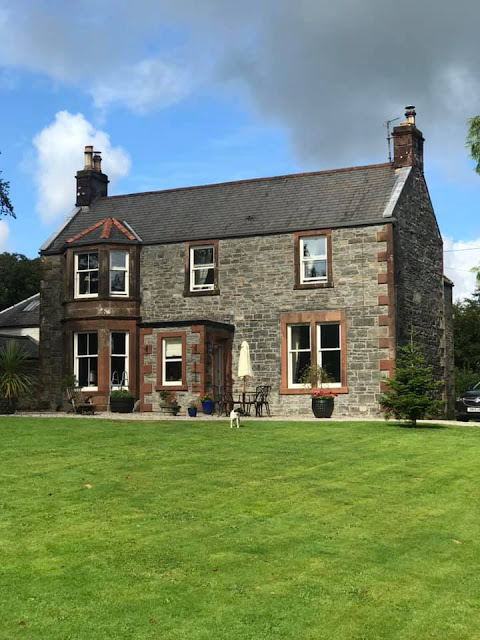 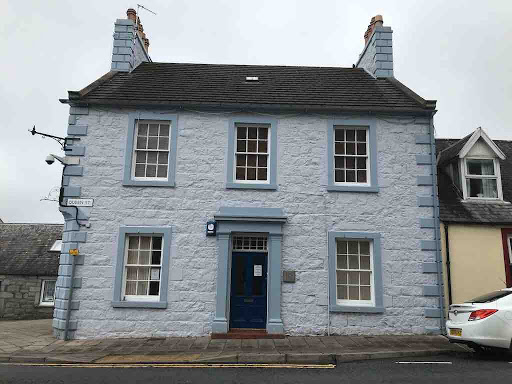