Brennan - Another letter from Knockmajor 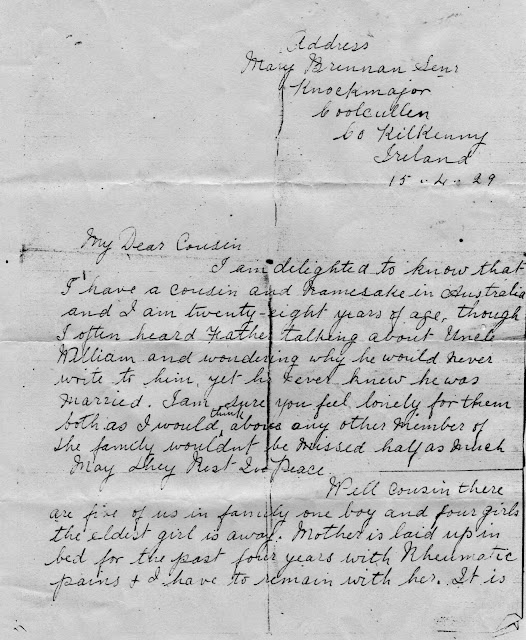 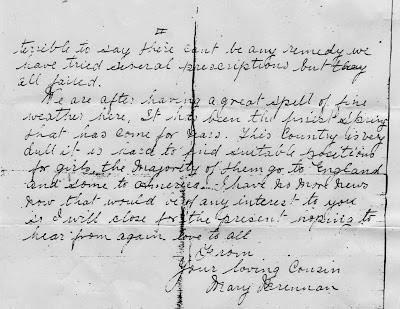 I am delighted to know that I have a cousin and namesake in Australia and I am twenty-eight years of age. Though I often heard Father talking about Uncle William and wondering whey he would never write to him, yet he never knew he was married. I am sure you feel lonely for them both as I would, think above any other member of the family wouldn't be missed half as much.
May They Rest In Peace
Well cousin there are five of us in family one boy and four girls, the eldest girl is away. Mother is laid up in bed for the past four years with Rheumatic pains & I have to remain with her. It is terrible to say there can't be any remedy we have tried several prescriptions but they all failed.
We are after having a great spell of fine weather here. It has been the finest spring that has come for years. This Country is very dull it is hard to find suitable positions for girls the majority of them go to England and some to America. I have no more news now that would be of any interest to you so I will close for the present hoping to hear from again. Love to all

From
Your living Cousin
Mary Brennan


Regarding point 5. William Brennan's arrival in Australia was very sad. His wife Annie died on the voyage to Australia in 1885, his daughter Margaret died a few weeks after arrival and his son Thomas died the following year. He did not remarry until 1896.