From my Bookshelf - Small Lives - Photographs of Irish Childhood 1860-1970

I treated myself to a couple of books for Christmas - not that I need an excuse!

Small Lives - Photographs of Irish Childhood 1860-1970 which is edited by Aoife O'Connor arrived this morning. 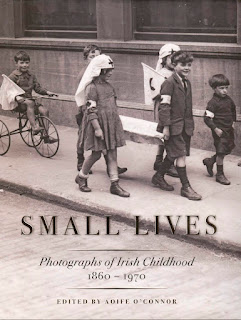 This book contains a wonderful collection of images taken over a hundred and ten year period in Ireland. Images include those from the city and country, those from wealthy families and extremely poor ones and those at work and at play. The differences between the rich and poor are often quite distressing.

As usual when I looked at this book I made a note of things that I hadn't been aware of or had not stopped to think about. Which photographs made me think of specific Irish families in my family?  What did I find interesting?

I wonder
I can probably answer yes to all of the above. My Irish families are quite a mixed lot - from wealthy Church of Ireland Irish living just north of Dublin, Scottish Presbyterians from Antrim (and probably before that from Scotland), and Catholics from Derry, Waterford, Clare, Tipperary and Cork.

Small Lives was a photographic exhibition held at the National Photographic Archive Templebar from August 2011 until June 2012. You can also see some of the images on the National Library of Ireland Flickr page.

If you have Irish ancestry this book is certainly worth purchasing.