on January 11, 2013
This morning I had the pleasure of corresponding with one of my husband's third cousins from Ireland. This has spurred me into spending the afternoon scanning. I'm set up on the dining room table sitting in front of the air conditioner on a very hot day here in Coffs Harbour.

The first letter was written in 1929 from Martin Brennan in Knockmajor to his niece Mary Ann Brennan in Armidale. Mary Ann's father William had died in December 1928 and she had obviously written to Ireland to inform his family. 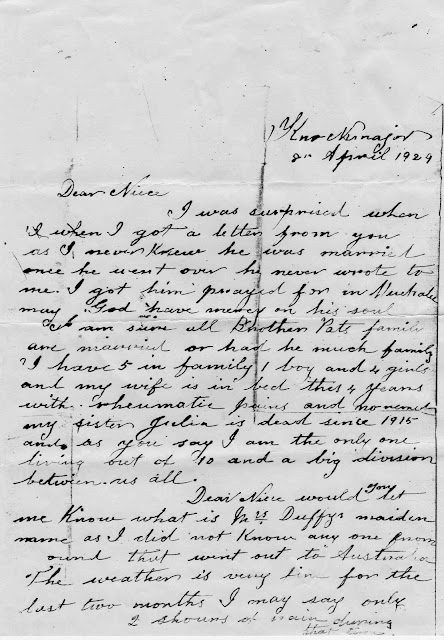 I was surprised when I got a letter from you as I never knew he was married once he went over he never wrote to me. I got him prayed for in Australia may God have mercy on his soul.
I am sure all Brother Pats family are married or had he much family? I have 5 in family 1 boy and 4 girls and my wife is in bed this 4 years with rheumatic pains and no remedy. My sister Julia is dead since 1915 and as you say I am the only one living out of 10 and a big division between us all.
Dear Niece would you let me know what is Mrs Duffys maiden name as I did not know any one from around that went out to Australia.
The weather is very fine for the last two months. I may say only 2 showers of rain during that time.
Have you ever seen any of the Maguire's (?) there are 4 boys and  girl out there they were neighbours of mine and two boys of the ?
Would you kindly send me Brother William Photo I would like to see it. I suppose I would not know him as I was very young and small when he left Ireland.
I have no more to say in particular at this time hoping to hear from  you soon.


As with many of my posts I need to look at the specific facts gained from the letter.

From my research I believe Martin Brennan's children to be Thomas, Margaret, Mary, Ellen (Nellie) and Kathleen.

A newspaper obituary in Australia says Mrs Larkin was a sister. I think she may have been Julia.

My research indicates that the 10 children were:
I hoping to make some headway with my Brennan research.