on January 25, 2012
Last year Shelly from Twigs of Yore challenged geneabloggers to blog about the oldest documentation we had about an Australian ancestor. This challenge actually prompted me to begin my blogging journey. My initial Australia Day challenge was about Dr William Lee Dawson. This year's challenge is described below.

Australia Day 2012: Wealth for Toil
To participate, choose someone who lived in Australia (preferably one of your ancestors) and tell us how they toiled. Your post should include:
I am again going to use my great great grandfather, Dr William Lee Dawson (1819-1871) as my chosen ancestor. William Lee Dawson began his medical studies on 1st November 1845 at the Apothecaries' Hall and St Vincent's Hospital in Dublin. His first courses were: Anatomy and Physiology, Demonstrations and Dissections, Principles and Practice of Surgery and practical and clinical instruction. It is interesting to note that the Anatomy classes took place during winter so that corpses wouldn't decompose as quickly.
Between 1845 and 1849 he attended classes at the School of Anatomy, Medicine and Surgery in Park Street, Dublin, Mercer's Hospital, the Coombe-Lying in Hospital and the School of Medicine of the Apothecaries' Hall. 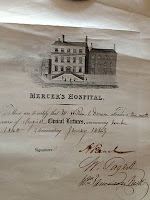 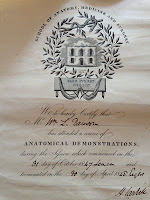 J.J. Rivlin in his article Getting a medical qualification in England in the nineteenth century states that by the mid 1840s the MRCS required experience of midwifery (including 6 deliveries), a course of lectures on physic, and one winter and one summer session in the hospital practice of physic. The requirement for the hospital practice of surgery was three winter and two summer sessions.


After completing medical studies in Ireland, William Lee Dawson went to study in London at the Royal College of Surgeons. He was admitted as a member of the college on the 22nd July 1853. In August of that year he was interviewed by W. Burnett, the Director General of the Medical Department of the Navy and was found "qualified to serve as Surgeon on board any of the vessels belonging to the Royal Mail Steam Packet Company." (Letter in my possession)


He sailed for New York aboard the Asia and there he met the ship Dee. His diary does not give any details of his medical work, but instead it is a record of the ports visited, the weather and his impressions of the various ports. William returned to England in June 1854 after resigning "in consequence of the Surgeons not having the same privileges as the other officers, they coming home every six months." (WL Dawson - diary)


His next appointment was to join the ship Mooltan bound for Hobart Town. Upon arrival in Hobart Town the Immigration Agent stated that "The Surgeon Superintendent appears to have paid much attention to his charge, and to feel a great interest in the people. His familiar acquaintance with their name and circumstances is very remarkable; he has also taken much interest in their disposal after arrival." (CSO 24/257/10644 Archives of Tasmania)

William Lee Dawson was appointed Medical Officer at the Huon until his death in 1871. Several years ago, I looked at the death registers for Franklin to give an insight into  the type of work performed by Dr Dawson. There were many accidents involving timber felling - in fact on one day in October 1858 five people aged from 6 to 50 were accidentally killed by the felling of a tree. He possibly would have been at the birth of triplet daughters born to John and Jane Price. One was stillborn and sadly Maryanne and Eliza died ten days later from debility. The winter of 1860 was particularly bad as 5 children died from whopping cough and in the first three months of 1866 five children died from cynanche tonssilaris - an acute inflammation of the throat where the patient struggles for breath. In 1871 a baby boy died from inanition combined with a malformation of the palate and other portions of the face and lips. Others were accidentally drowned, burnt or died from whooping cough, influenza and acute diarrhoea. William Lee Dawson was called to give evidence at many inquests and his diary gives the names of those deceased and their cause of death.


A family story tells of a police officer bringing in an injured timber worker whose leg needed to be amputated. The police officer could not manage to stay in the room to assist, so my great grandfather who was 10 years old at the time had to assist.


Unfortunately William became ill with consumption and died on 29th June, 1871 aged 51. He left a wife, Emma and 4 young children. His obituary in The Mercury on 30th June 1871 stated that he was a benevolent, but rather eccentric practitioner (who) had been the favourite medical advisor to all persons in the Franklin district....His nature was of the true character of charity - universal, and consequently embracing all objects and persons, poor as well as rich. His skill as a surgeon and operator was not surpassed in this colony. He had his failings like other men, but they were unlike those of most colonists "written upon his sleeve" and exposed to public criticism. His virtues preponderated over what are called failings, and the attentions paid to his wearying sick bed show that he was beloved by those who laughed at his eccentricities, while they believed in his inestimable value as a citizen.


From 1854 until 1871 Dr William Lee Dawson provided medical care for residents of Franklin and the Huon district of Tasmania. Although one might expect Dr Dawson to have left his family in a reasonable position financially, a letter sent from Dublin to his widow expresses regret that he did not leave them in favourable circumstances. Perhaps this was because of his charitable nature.


My sincere thanks go to his daughter Louisa and her daughter and grandchildren who treasured the documents which have allowed his family to gain an insight into the life of William Lee Dawson. I only hope that the current custodian can take as much care and keep them safe.
Australia Day challenge Franklin Huon MRCS Twigs of Yore William Lee Dawson