on January 26, 2011
I have been meaning to start a genealogy blog for some time. I agonized over what to call it and have already changed the title twice today. Over the summer I have revived my genealogy twitter account (@shazbrennan) and begun to follow several blogs via Feedly.

Shelly from Twigs of Yore set an Australia Day challenge for genealogy bloggers, so I thought it’s now or never. 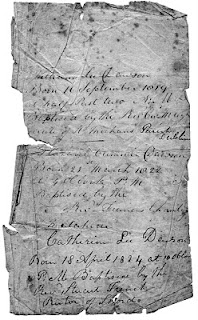 William Lee Dawson
Born 16 September 1819
at half past two A.M.
Baptised by the Rev
Curate of St Michans Parish
Dublin

Do you remember the research process that lead you to it? How and where did you find it?
In 1990 my parents went on a holiday to Ireland. While there they decided to go to the property in Swords, Co. Dublin where my great great grandfather William Lee grew up. Descendants of his younger brother Richard still lived there. While discussing the family history, a shoebox was produced. In it were copies of family research conducted between 1906 and 1910 - transcriptions of wills and land transactions. Amongst the papers was the document reproduced here. This document was generously given to my mother and she has since given it to me.

Tell us the story(ies) of the document. You may like to consider the nature of the document, the people mentioned, the place and the time. Be as long or short, broad or narrow in your story telling as you like!

One can discover quite a lot about a single sheet of paper. The first question one asks regarding this document concerns its age. Was it first written in 1819 when William Lee Dawson was born or was it written much later? Certainly I would like to hope this document is almost 200 years old. The fact that the times of birth are given for each of the three children would suggest to me that it was written at the time or relatively soon after. Perhaps others would disagree? Birth times certainly would not be known by others at a later date.

We can tell that the Dawson family were members of the Church of Ireland. William Lee was baptised at  St Michan's Church, Dublin.  Although we are told who baptised Richard a church is not named. Catherine was baptised by the Rector from Swords. Does this mean the family moved from Dublin to Swords between the birth of William and Catherine? Or was William simply baptised in Dublin. The distance is 11 km.

So where did they live?

The 1821 Census (I know you are saying it was destroyed, but remember research was commissioned between 1906 and 1910) states that Robert Dawson (36) farmer of Townland of Malahide and Yellow Walls, Ellenor (36) his wife, William (1 1/2) his son and Sarah Giles (30) lodger lived on nine and a half acres of land.
The Dawson family purchased the lands of Kilronan, Swords, Co Dublin some time between 1833 and 1840. (Research commissioned by Richard Dawson c1906).


Can any significance be attached to the second names of the children - Lee Cummin and Lee? If so, one needs to look for a Lee and Cummin (Cuming) family. Further research has confirmed the Lee surname. 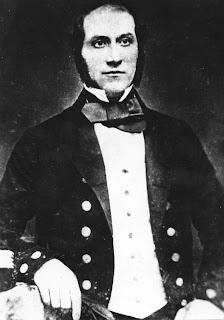 How my family came to discover the location of his huge portrait, his medical certificates dated from the 1840s, his membership to The Royal College of Surgeons in London, his diary, his amputation saw and  daguerrotype portraits of his family from places as far apart as Melbourne, Victoria and Meeandarra in Queensland would fill several blog posts. It seems that his each of his four children were given some of his possessions when he died or perhaps when his wife died. It's a shame that my branch of the family "lost" a family tree which he brought from Ireland that detailed several generations of his family. My great grandfather Harry died at a family reunion in 1916 and we are not sure if the family tree went missing then or in a house fire in Brisbane in the 1960s when his son's house was destroyed by fire.

What still eludes us?
The connection to a Cuming family and what information about our Dawson family was written on the missing family tree. We do know it was a Dawson family tree. On the flip side we have a lot of information from the 1906 - 1910 research that may not be available today.
Australia Day challenge Dawson Malahide St Michan's Swords William Lee Dawson