on January 28, 2012
Amongst the treasures at my nanna's house is a renewal of a Dray Proprietor's License dated 28th January 1892 belonging to my great, great grandfather John Ryan who lived at 23 Cambridge Street in Balmain. 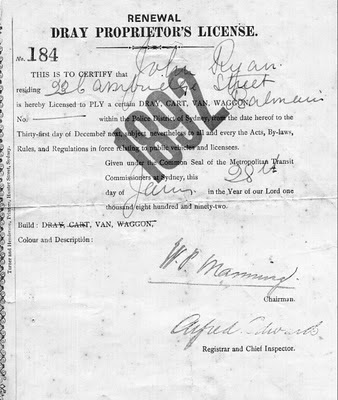 A simple google search for "dray proprietor's license" Sydney came up with the 1854 Act for the Licensing and Regulation of Carters plying for hire with in the City of Sydney. It is a 9 page document which sets out the terms and conditions that were expected to be met by license holders.
Section 4 stated that the license would only be granted if the proprietor or driver was of good name fame and character. The vehicle could not be unsafe or in bad repair or unfit for the conveyance of goods or merchandise. The vehicle also had to have its number painted on a plate or plates and affixed to wherever the Commissioners saw fit. I assume 184 must have been John Ryan's number. Unless the charges had been increased he would have paid £2 annually for his license.
The license appears to be for a van. Earlier he had a dray and there was a photograph of him with his dray but unfortunately this has disappeared.
John Charles Ryan