on January 11, 2012
As a genealogist it is important to place your family in a location and a time period. Families, place and time are crucial to make your family history live. Through research I have discovered that in the past members of our family were in significant places at significant times or were part of significant events.

Without research, I would not have known the following:

The list goes on. But what about the families that didn't seem to leave any information other than what can be gleaned from births, deaths and marriages? What was happening in the town or area in the time period they lived there? Check for images on Picture Australia.

The image below which is out of copyright and can be found at the State Library of Queensland shows the official welcoming party for the Duke of Gloucester when he entered Queensland in 1934. 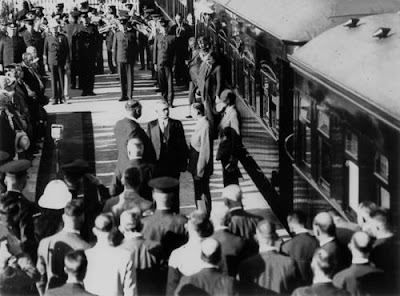 A quick search of the internet reveals the following:
The Duke of Gloucester, sent primarily to celebrate the centenary celebrations of Victoria, toured Australia in 1934. Travelling by train and car, he spent 10 days in Queensland. Arriving on 1 December 1934 he visited Wallangarra and Stanthorpe and spent the weekend at “Terrica” station in the Stanthorpe region. The British Royals: a Queensland Story
Why could this be significant for my family? My Moore family lived in Wallangarra at that time and I'm certain that most of the townspeople would have turned up to witness this event. Of course, I'd love to know if any of my family are standing there watching what is happening. Perhaps they are out of the picture. I wonder which people in Wallangarra at the time were considered important enough to be standing in the front few rows or were they the dignitaries who were probably travelling on the train with the Duke?

I think my family would have been there, don't you!
Duke of Gloucester Gustav Baumgarten Moore Picture Australia State Library of Queensland Wallangarra Willi Scheef William Lee Dawson