on July 17, 2011
From Randy Seaver Genea-Musings.
Ah, Genea-folks, it’s Saturday Night again – are you ready for more Genealogy Fun?
Your mission tonight, should you decide to accept it, is to:
1)  List your 16 great-great-grandparents with their birth, death and marriage data (dates and places).  [Hint - you might use an Ancestral Name List from your software for this.]
2)  Determine the countries (or states) that these ancestors lived in at their birth and at their death.
3)  For extra credit, go make a “Heritage Pie” chart for the country of origin (birth place) for these 16 ancestors. [Hint: you could use the  chart generator from Kid Zone for this.] [Note: Thank you to Sheri Fenley for the "Heritage Pie" chart idea.]
Well it is Sunday here in Australia but here are my great great grandparents. 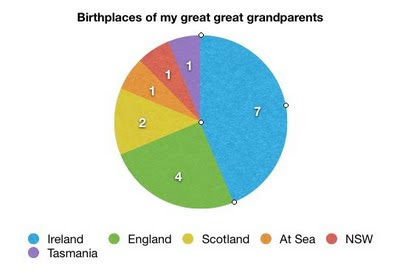 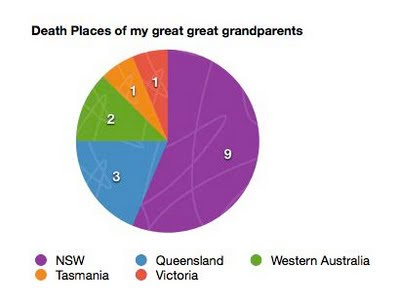