on January 28, 2018
The Week 2 prompt for Amy Johnson Crow's "52 Ancestors in 52 Weeks" blogging challenge is "Favourite Photo." I really can't think of a favourite photo. I've agonised over which one to share. I have been fortunate to have been given many photographs from both my sides of my husband's and my family. Many are portraits in huge decorative frames. I can see eight now; there are many others in boxes and old suitcases. However, I won't share one of those.

I have another unknown family group which is a favourite because the caption on the back reads, "From all of us to all of you." Thanks.

However, I’ve decided to share one of my very small photographs. I have five photographs that are in little cases with delicate clasps. I am certain that two of them are daguerreotypes
as the images can only be seen in certain positions or angles which can be very frustrating. 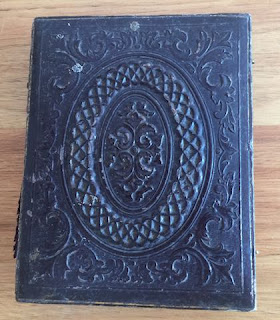 One is of my great, great,  grandfather Dr William Lee Dawson in his naval uniform who I wrote about in week 1. The second I think is of his wife Emma Seabrook.

Another is of him as an older man. The fourth is of William with his wife Emma Seabrook and their eldest child Catherine. The fifth remains a mystery but could possible be some of William's family from Ireland.

The photograph which I believe is of Emma is the smallest of the five. When I look directly at it I see a reverse image.

Today I tried to photograph the image. In my best attempt you can actually see the shadow of my phone but it does allow the image to appear. I was actually surprised to see the colour in the image and then checked and found that daguerrotypes were sometimes coloured.

If this is indeed Emma Seabrook I would imagine that it was taken some time between 1854 and 1857 as William arrived in Australia in 1854 and their first child was born in 1857. This would make her between 20 and 23 years old.

So who was Emma Seabrook?

Emma, the 3rd daughter of Henry William Seabrook and his wife Sarah White was born on 1 May 1834. She was the first of the family to be born in Hobart Town. Emma was baptised on 19th May in the same ceremony as her cousins William and Henry White.

The story of how she met her husband was told to me by one of their grandsons, Frank Dawson. They were both at a cricket match in Hobart. It was a warm day and William noticed that the young lady standing near him looked rather pale. He said, "Lean on me, you look faint." When she demurred he replied, "You might as well because you're going to marry me."

They were only married for 14 years before Dr Dawson died of consumption on 29 June 1871 in Franklin where he was the medical officer.

A few years after his death Emma and her four children Catherine, William, Louisa and Robert moved from Franklin in Tasmania to Melbourne. Several of Emma's siblings lived there.

Like her husband, Emma died at the age of 51 on 27th July 1885 in East Melbourne and is buried at the St Kilda Cemetery.