on May 06, 2011
Sometimes you come across a fantastic family photograph. This photograph is one of those. 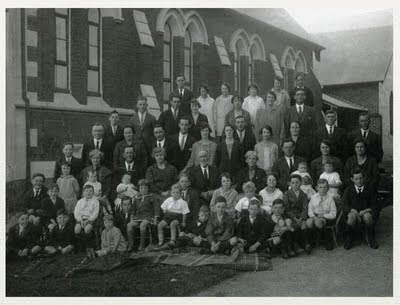 What a fantastic family group! I was fortunate that family members knew the occasion. However, if I didn't know the occasion I need to look for clues in the photo. The photo was taken outside a church and there are two older people sitting in the middle of the photo. It is obviously an important occasion, either for a family or a church group.

It is the celebration of the golden wedding anniversary of Robert Waters and his wife Ann Dawson, of Armidale, who were married on 30th April 1878 - 133 years ago. The photo was taken 83 years ago this week.

The occasion was reported in The Armidale Express (5 May 1928)

GOLDEN WEDDING
Mr and Mrs R Waters
On Monday, April 30, Mr and Mrs R Waters, of Silverton, Metz, celebrated their golden wedding. They were married at Hazeldale, Dumaresq, by the Rev Dr Sellors on April 30, 1878, Mrs J C Lees (nee Miss J Waters) was bridesmaid, and the late Mr T R Dawson was best man. Over 30 descendants and guests were present, the grand-children numbering 58. The breakfast was held in the Methodist Kindergarten Hall. The catering by Mrs Charlton was excellent, while the tables were beautifully decorated. The wedding cake (made by Mr Brooks) was suitably decorated with golden ornaments.
The Rev R J Williams proposed the toast of “The King,” and Mr A C Nettle that of “The Bride and Brodegroom.” After a humorous speech, Mr Nettle recited a poem he had composed for the occasion.
Mr R Saunders supported the toast.
Rev Williams spoke on behalf of the members of the Methodist Church, and recited a poem, suitable to the occasion, entitled, “The Women on the Land”.
Mr R Waters responded, recalling incident of his early pioneering life. He said he selected Silverton in the year 1872 - years before the famous gold-mining days of Hillgrove.
Two daughters were unable to be present - Mr and Mrs F J Nelson and family of Taree, and Mr and Mrs J Rogers of Lithgow.
Telegrams of congratulations were received from: Mr and Mrs W Scribner (Haberfield), Mr and Mrs J C Lees (Five Dock), Mr and Mrs Dale (Gordon), Mr and Mrs A Waters (Murwillumbah), Mr and Mrs J Davies (Newcastle), Mr Northey Davies (Newcastle).
After the breakfast, the guests retired to the Sunday School Hall, which had been artistically decorated by Miss Ivy Nettle and Mr and Mrs A Elliott (grandchildren). A splendid musical programme was rendered. The pianists were Mesdames R J Williams, A Scheef, E Waters and J Sewell. Recitations were given by Miss Addie Nettle, Miss Edith Elliott, Master Jack Sewell and Arthur Waters (grandchildren), also Rev R J Williams. Company songs were also given by the sons, daughters and grandchildren.
Numerous were the gifts received by the grand old couple. Gold and “golden syrup” came from a little granddaughter.
During the evening Mr and Mrs Waters joined with the young folk in games such as “Jolly Miller”, “Musical Arms,” etc., surprising everyone by their activity.
The festal day terminated at a fairly late hour with the National Anthem.
We are very fortunate to have both a newspaper account and a photograph of the occasion. It would be complete if we had the poem written by Robert and Ann's son-in-law Alf Nettle.
Robert and Ann had 10 children and 73 grandchildren, several of whom were born after this occasion.
Ann Dawson Armidale Armidale Express Dale Elliott golden anniversary Lees Metz Nelson Nettle Robert Waters Rogers Scheef Sewell Silverton Waters