on February 26, 2011
I have written a couple of posts about Samuel Dawson in the past few weeks. After publishing a letter written by him in 1878 I decided to see what else I could find out about him.

I have followed up with an email to the Maritime Museum in Liverpool seeking information about Samuel. Last week I received these images from John Winrow, the assistant curator. 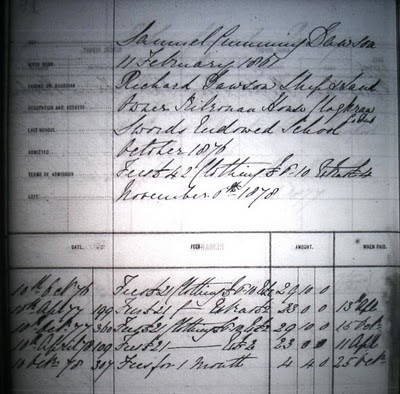 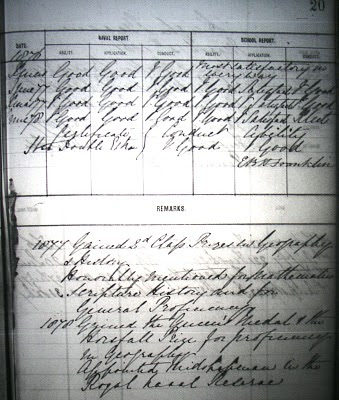 I now have more information to include in Samuel's story.

He attended the Swords Endowed School which I will have to research further. Under terms of admission it states the fees were £42. It looks as though his father Richard Dawson had to pay for Samuel to become a Conway cadet. Both his naval and school reports while on the Conway were outstanding. In one of my earlier posts I surmised that he won a telescope for either the Chairman of the Conway Committee Prize or the Royal Geographical Prize. I now know his prize was in Geography.

Samuel's report comments read:
1877 Gained? class prizes in Geography and History. Honorably mentioned for Mathematics, Scripture, History and for General Proficiency.
1878 Gained the Queen's Medal and the Horsfall Prize for proficiency in Geography. Appointed midshipman in the Royal Naval Reserve.