on February 07, 2011
Amanuensis Monday was started by John Newmark in his blog Translyvanian Dutch and encourages family historians to transcribe family letters, journals, audiotapes and other historical artifacts. An amanuensis is a person employed to write what another dictates or to copy what has been written by another.
Each Monday I hope to transcribe one of the many letters or diary entries in my possession.
Today's letter was written by Samuel Dawson of Cloghran, Co Dublin, Ireland in 1878 to his aunt Emma Dawson in Melbourne, Australia. Emma's late husband, William was the brother of Samuel's father Richard. 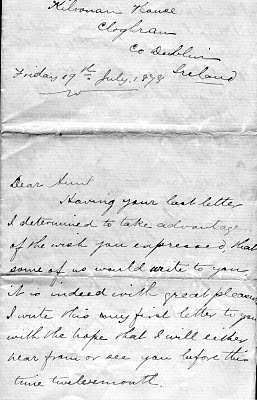 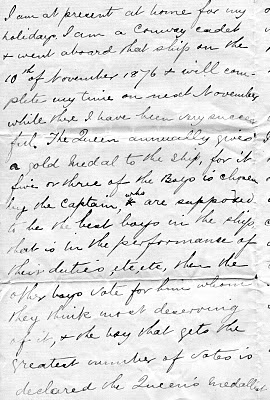 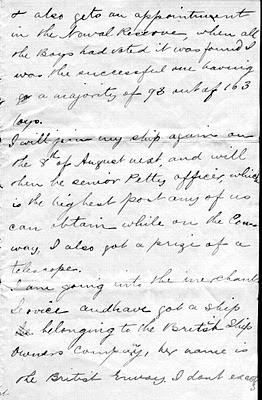 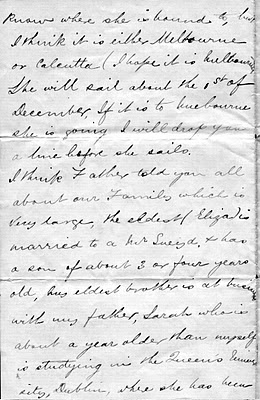 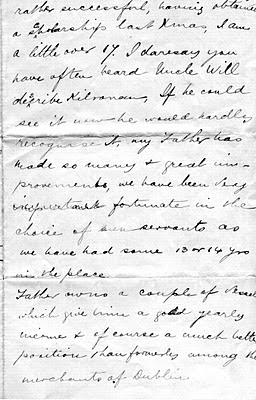 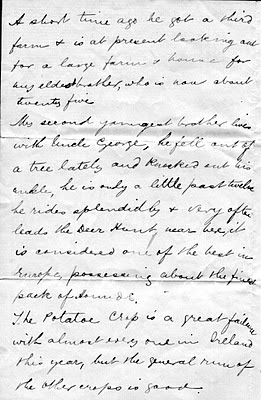 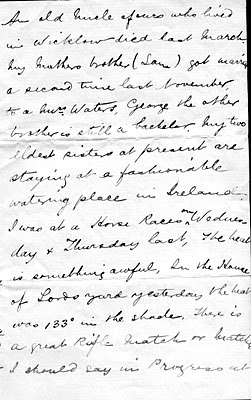 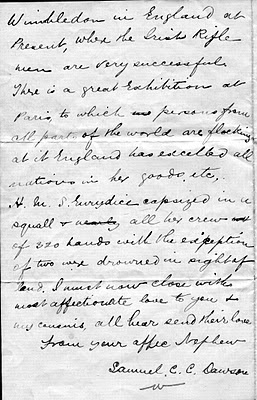 Kilronan House
Cloghran
Co Dublin
Ireland
Friday 19th July 1878
Dear Aunt
Having your last letter I determined to take advantage of the wish you expressed that some of us would write to you it is indeed with great pleasure I write this my first letter to you with the hope that I will either hear from or see you before this time twelvemonth.
I am at present at home for my holidays. I am a Conway cadet and went aboard that ship on the 10th of November 1876 & will complete my time on next November. While there I have been very successful. The Queen annually gives a gold medal to the ship for it five or three of the boys is chosen by the Captain, who are supposed to be the best boys in the ship that is in the performance of their duties, etc, etc, then the other boys vote for him whom they think most deserving of it, & the boy that gets the greatest number of votes is declared the Queen's medallist & also gets an appointment in the Naval Reserves, when all the Boys had voted it was found I was the successful one having a majority of 98 out of 163 boys.
I will join my ship again on the 8th August next, and will then be senior Petty Officer, which is the highest post any of us can obtain while on the Conway. I also got a prize of a telescope.
I am going into the merchant Service and have got a ship belonging to the British Ship Owners Company, her name is the British Envoy. I don't exactly know where she is bound to, but I think it is either Melbourne or Calcutta (I hope it is Melbourne). She will sail about the 1st of December. If it is to Melbourne she is going I will drop you a line before she sails.
I think Father told you all about our family which is very large, the eldest Elizabeth married to a Mr Sneyd, & has a son of about 3 or four years old, my eldest brother is at business with my father, Sarah who is about a year older than myself is studying in the Queen's University, Dublin, where she has been rather successful, having obtained a scholarship last Xmas, I am a little over 17. I daresay you have often heard Uncle Will describe Kilronan. If he could see it now he would hardly recognise it, my Father has made so many & great improvements, we have been very fortunate in the choice of menservants as we have some 13 or 14 yrs in the place.
Father owns a couple of vessels which give him a good yearly income & of course a much better position than formerly among the merchants of Dublin.
A short time ago he got a third farm & is at present looking out for a large farm & house for my eldest brother, who is now about twenty five.
My second youngest brother lives with Uncle George, he fell out of a tree lately and knocked out his ankle, he is only a little past twelve he rides splendidly & very often leads the deer hunt near here it is considered one of the best in Europe, possessing about the finest pack of hounds.
The Potatoe crop is a great failure with almost every one in Ireland this year, but the general run of the other crops is good.
An old uncle of ours who lived in Wicklow died last March. My mother's brother (Sam) got married a second time last November, to a Mrs Waters. George the other brother is still a bachelor. My two eldest sisters at present are staying at a fashionable watering place in Ireland.
I was at a Horse Races on Wednesday & Thursday last. The heat is something awful. In the House of Lords yard yesterday, the heat was 133º in the shade. There is a great Rifle Match or Matches I should say in progress at Wimbledon in England at present, where the Irish Rifle men are very successful.
There is a great exhibition at Paris, to which persons from all parts of the world are flocking. At it England has excelled all nations in her goods, etc.
H.M.S. Eurydice capsized in a squall & all her crew of 320 hands with the exception of two were drowned in sight of land.
I must now close with most affectionate love to you my cousins, all hear (sic) send their love.
From your affec nephew
Samuel C C Dawson
British Envoy Cloghran Conway Dawson deer hunt Elizabeth Sneyd Eurydice Samuel Dawson Sneyd