on April 17, 2012
When my daughter suggested that we catch a train from London to Glasgow, hire a car and drive to Edinburgh via Loch Ness I couldn't have been more delighted.

Little did she know that although my great grandfather had been born in Antrim, Northern Ireland he and his family lived in Greenock (not far from Glasgow) before they emigrated to Australia.

Our TomTom, which we called Lorraine led us straight to 52 Wellington Street, Greenock, West Renfrewshire.

At the time of the 1881 Scottish census this was the home of John Moore, his wife Margaret and their two children Knox and Rosetta. John's brother Knox and his wife Jane and their sons John and James lived next door at number 54. Both John and Knox were sugar house employees. 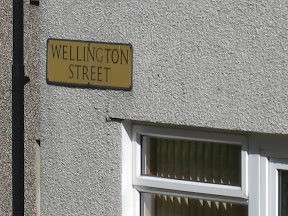 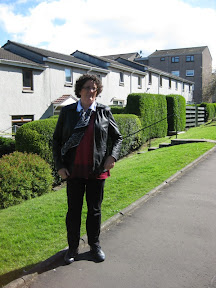 Outside the house where my great great grandfather Knox Moore lived with his parents John and Margaret in 1881.

Research of course always leads to more questions which necessitate further research.
1. Has the street numbering changed from 1881? A more careful analysis of the census before I left home would have allowed me to see if this group of houses are in the same location, i.e. next to what cross street.
2. Does this group of houses date from before 1881?
3. The houses are covered in stucco or some sort of pebblecrete. Was this around then?
4. Which sugar house did they work in and what work would they have been involved in?
5. I'll need to check Abebooks for any local history books of the area to satisfy my curiosity here.

I've now seen where the Moore's lived in Scotland and I've been to the general area in Antrim where they were born so I'm satisfied.

If you are also descended from John Moore or his brother Knox I would love to hear from you. Click on the About Me link and then the link to my email.