on August 28, 2011
I have written three previous posts about Samuel Cuming Dawson of Cloghran, Swords, Co Dublin, Ireland. The first discussed a letter he posted to Autralia in 1878 when he was a cadet aboard the Conway. The second showed the honour board when he won the Queen's Medal. The third post discussed information from the Maritime Museum in Liverpool.

Today I write what may be the final post for Samuel Dawson. Last year, I visited Swords and found Samuel's headstone at St Columba's Church of Ireland at Swords, Co Dublin. Unfortunately, I couldn't read the date of his death.


Today I have been using my NLA card and have been trawling the Irish Newspaper Archives with great success. (However, it's a shame the site is so slow to move to the next result page.)

A search for Dawson and Cloghran has come up with 598 results and one of the first ones was an obituary for Mr Sam C Dawson. 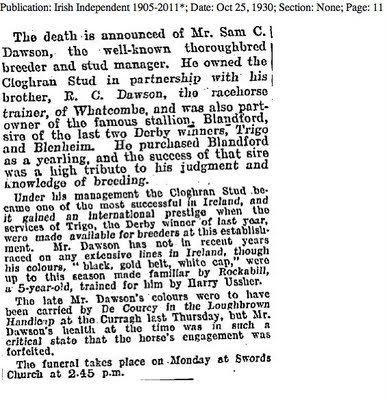 Of course, his obituary invites further research. His brother R.C. Dawson warrants more work as does the horse Blandford. Fortunately most of this has been done and will feature in future blog posts.
Blandford Cloghran Dawson Irish Newspaper Archives Maritime Museum Liverpool NLA Samuel Dawson