This is the fourth post in a series of posts over the next few years to remember all the men in my extended family who enlisted in World War 1.

Originally I had identified 26 soldiers who enlisted between 20 August 1914 and 2 November 1918.  However, with more careful checking this number has now risen to over 35. Of these five were killed overseas or died here in Australia.

Lawrence Seabrook was the sixth son of William Alexander Seabrook and his wife Eliza Grant Lumsden of Hobart. Like the majority of the Seabrook family Laurie worked in the building trade. By November 1914, he had been apprenticed to his father as a bricklayer for 12 months and had been a member of the Naval Reserve.

His enlistment papers state that he was 19 years old. However, his actual birth date was 10 November 1898, so in fact Laurie was only 16 years old.

This attestation paper was signed 30th November 1914 and Laurie was assigned to the Field Butchery. It appears as though his correct age may have been discovered as the attestation paper has the words "discharged unsuitable 12/3/15" written in blue pencil across the page. Laurie was to reenlist later in the war. 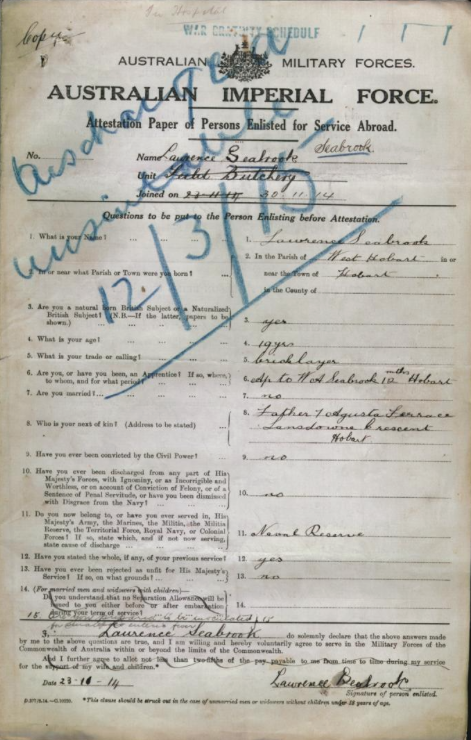