on January 03, 2014
Today, 3rd January marks the centenary of the death of William Thomas Seabrook who was born in Melbourne in 1881 and was tragically drowned while trying to rescue Muriel May Hunter in dangerous surf at Point Lonsdale in Victoria.

The following is a copy of what I have previously written and can be found on the Brighton Cemetery website.


William (Will) Thomas Seabrook was born in 1881 at Hawthorn, the sixth of ten children born to William John Seabrook (1846-1914) and Mary née Mason (d 1912).  As a young man Will was a member of the South Yarra Presbyterian Gymnastic Club, later becoming an instructor with the club.  In 1901, he joined the Victorian Scottish Regiment Association.  In 1905 he was a colour sergeant and by 1914 he held the rank of captain.  He worked for the estate agency business of “Sydney C. Arnold and Company”.  According to family sources, Will was described as “a well-proportioned, muscular young man, who took an interest in all classes of athletic exercises”.  As a swimmer he had been particularly successful.  Will was 32 years old and lived at home with his family at Dunmoreburn - 9 Alleyne Avenue, Malvern. 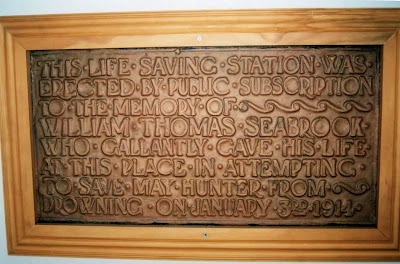