on February 24, 2019
My 5g grandparents John Milroy and his wife Jane McCarlie are buried in Stoneykirk, Wigtownshire, Scotland. I had seen a photograph of their headstone but I just had to see it myself.

The short drive from Stranraer was along narrow county lanes. Unfortunately it began to rain but I was not to be deterred.


My previous research on Google maps had shown that St Stephen's Church and graveyard was tucked away behind two houses in Stoneykirk. 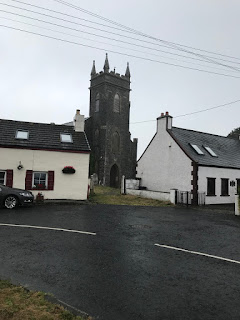 Unfortunately it began to rain and became quite miserable so we were forced to abandon the search for John and Jane. If I had been able to access the image I had of the headstone it would have given me a clue to its specific location. My plan (unbeknown to my husband) was that I would return early the following morning before we caught the ferry to Belfast.

The headstone was easy to locate the following morning. It had been on my husband's side of the graveyard to search and he had misread the surname on the headstone!

ERECTED
TO THE MEMORY
OF
John Milroy
Late tenant in FREUGH who departed this life
the 30th December 1847, aged 77 years
ECCL  LX 10
Whosoever they hand findeth to do, do it
with thy might for there is no work nor device nor
knowledge, nor wisdom, in the grave whither tour guest.
ALSO
JANE CARLIE his Wife who departed this life 19th June 1851
AGED 84 years
ALSO INTERRED HERE
MARGARET MILROY his Daughter died 23rd August 1875
AGED 82 years
ALEXANDER MILROY his son Farmer in Galdenoch
died 11th Sept 1879 aged 86 (?) years
MARGARET MCMASTER WIFE OF ALEXANDER MILROY
died 18th Mary 1891 aged 82 years
JAMES MILROY who died at Galdenoch
?

The Scottish Old Parish Registers state that John died on 31st December 1847 and was buried on 2nd January 1848. (1) Note the difference between offical date of death and date on the headstone.

I'll need to start saving again as I would like to explore this area of Scotland further as there is much I didn't get to uncover.