on February 22, 2014
This week is week 6 of  Shauna Hicks challenge for 2014.  Shauna said that this blog challenge is to stimulate my own genealogy blogging efforts in 2014 by focusing on a different kind of genealogical record each week. I wanted a challenge that reflected my own archival background as well as my own genealogy interests and there are probably lots of other records that I could have included. The challenge has an Australian focus but most of these records will be found just about anywhere in the genealogy world.

Sometimes it can be difficult in a challenge like this to actually narrow the focus of the individual blog post. I could talk about the difficulties encountered because I grew up 50 metres from the Queensland and New South Wales border and spent a long time looking for a family property at the Queensland State Archives only to find that it was in New South Wales. However, I won't discuss that here today.

Instead I want to discuss two consecutive records from New South Wales.

Patrick Flynn who arrived in Sydney aboard the Southworth in March 1822 and his wife Hanora who arrived with their children on the Thames in 1826 have left a paper trail which documents parts of their life in Australia. One of the most interesting is one land record pertaining to Patrick Flinn. What makes it so amazing for us is that the typed record spanned two pages and the record following is the one that still has us wondering. 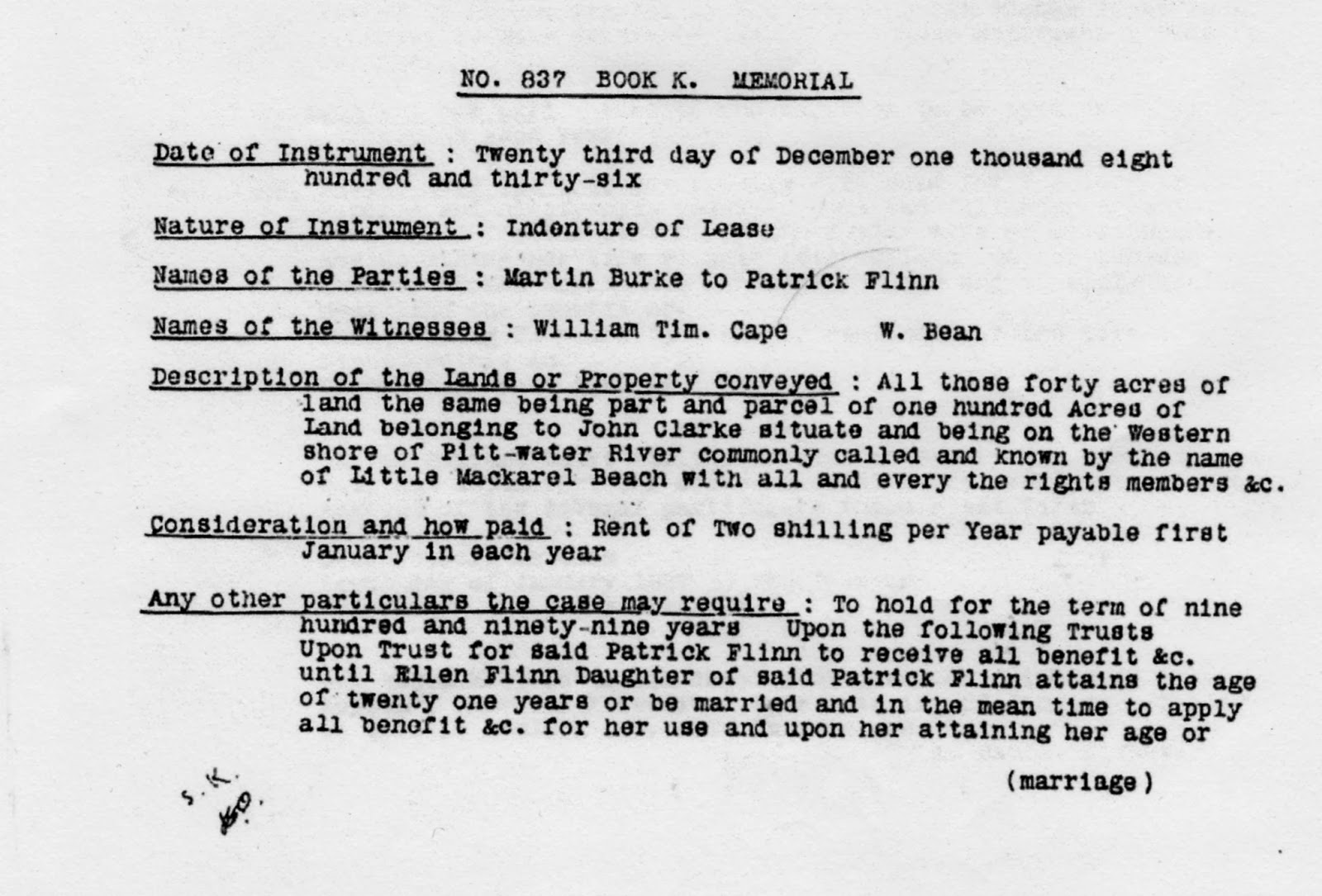 Parts of the Flynn story have been mentioned in a few publications including Joan Lawrence's Pictorial History of Pittwater and James J Macken, Martin Burke -  The Father of Pittwater.

In a small hut on the point of land 200 years east of Church Point lived a fisherman, Paddy Flynn.......Both John Johnson and Paddy Flynn were to join Martin Burke in the first application for a grand of the Basin land. (p. 70)

Two other of Martin Burke's close associates also applied  to buy land surrounding the Basin. Paddy Flynn, who had moved from Bayview to Little Mackeral Beach with Martin Burke applied for 50 acres on the southern shore of the Basin and John Johnson, the Foley farm worker did so also. (p. 77)
They were not successful in their application.

Burke and Flynn must have been good friends as the 999 year lease dated December 1836 from Martin Burke to Patrick Flynn was to be held in trust for his daughter Ellen. The remainder of the lease was finally sold by Ellen and her husband Henry Merrett in 1854 to Cornelius Sheehan. Along with the land the transfer included houses, outhouses, edifices, buildings, barns, stables, yards, gardens, orchards ways, paths, passages, waters, watercourses, timber, wood, hedges, ditches..." (p. 85)


Unfortunately I can't locate any of the photos I took when I visited Currawong Beach. This highlights my biggest genealogy nightmare - images. However, it was possible to imagine what the place may have been like as there were still large undeveloped areas. Oh to still have the lease!

We were fortunate that the next lease in Book K also relates to our family.

Like much genealogy research these documents ask more questions than they answer.

Unfortunately we do not know if the Moylans ever lived in Maitland. Thomas died in May the following year and was buried at the Devonshire Street Cemetery.

The 999 year lease was to be left to Ann and then their eldest son Thomas. However, on 17th December 1839, Ann applied to have her two eldest children Thomas and James admitted to the Male Orphan School (the Catholic School being full) because she was in destitute circumstances and unable to support them.

My questions and future tasks:

Thanks Shauna for this topic as it has got me thinking again.