on August 05, 2012
A few weeks I posted this photograph asking if anyone had could guess what it is. Well now I've got the answer for you. 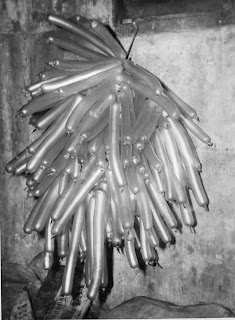 This photograph was taken at my father's work. I imagine it was taken in about the 1950s as I have many photographs taken at this time. My father worked at Anderson's Meat Packing Company at Wallangarra on the Queensland-NSW border.

The image shows pumped up intestines which were then placed in drying rooms. After drying the ends were cut off and packed flat in cartons. And of course you can guess what they would have been used for - sausage casings.

Here is a link to the wikipedia article about sausages.