on July 12, 2012
During a recent tidy up of my filing cabinets I discovered 2 school books that had been placed in there for safe keeping many years ago.

The first book was My Busy Book from 1965 when I was in Kindergarten at Jennings Public School. Perhaps some of you may remember the salmon coloured books from the 1960s. Fortunately it was a small school. The teacher traced many shapes each afternoon for us to fill in with various patterns the next day. She also wrote dotted words for us to trace the next day. It seems that jelly pads had yet to reach Jennings. 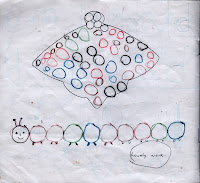 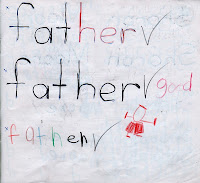 The second of these exercise books belonged to my grandfather's brother, Matthew John Moore who attended Jennings Public School. I haven't always been in possession of this book. I attended the Jenning's centenary celebrations in 1990 and was excited to see that this book was part of the display. I asked the organisers who had donated the book for the display but was informed that it was found, along with several other books in the storeroom out the back. A few weeks after I was surprised to receive the book in the mail as a gift.

The exercise book is dated 10 November 1922 and was used for the Qualifying Certificate Examination for Matthew J. Moore who was in 6th class and was 14 years and 10 months. No (3) is written inside the front cover, so perhaps there were two previous books. 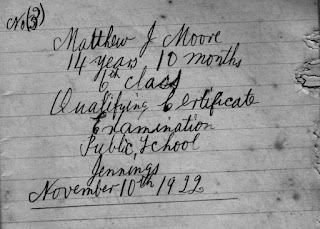 There were several parts to this examination.

The book continued to be used the following year. However, the writing style is different, so perhaps someone else filled in the rest of the book.

Wallangarra is the town on the Queensland side and Jennings is on the New South Wales side of the border.

In our town we have a large Station comprising Ladies Waiting Room, Stations Masters Office, Parcels office, Ticket office, a large dining room capable of seating one hundred and fifty people also a tea bar and hotel bar. The post office is at the lower end of the station. There is also a triangle where both trains can be turned. This is done by three rails. There are two hotels one built and the other in course of erection. The men about here mostly work in the Railway Department. Others have orchards and do dairying.

As with many of my posts I now want to see what family or useful information can be gained from Matt's book.

1.  One of the letters written was to Foy and Gibson in The Valley, Brisbane asking for patterns and prices for materials. This was probably how people in Wallangarra purchased materials.

2. The composition discusses a bush walk gathering wild roses and maiden hair fern. One of the boys was bitten by a snake. A description of how to tie a tourniquet and scarify the bite was discussed. Luckily, like all boys then he had his pocket knife with him. Treating snake bites was probably general knowledge for young boys then.

3. Two of the stories mention filling a pickle bottle with water. I wonder what these looked like?

4. Another letter says they will meet the visitor at the Station. Travel to Wallangarra in 1922 would normally have been by train.

5. The description of Wallangarra stated that one hotel was currently being built. This was the Jennings Hotel which is having 90 year celebrations at the end of the year.

6. The triangle where the trains could be turned was used because Wallangarra/Jennings was the terminus station for Queensland and New South Wales and I presume that the engines had to be turned round.

An aside - My great grandmother, Mary McColm was one of Jennings' original pupils in 1889. Her children, including my grandfather James and his brother Matthew attended there. My father, however, went to Wallangarra State School on the Queensland side of the border. I went to Jennings like my grandfather and his mother. Unfortunately, I can't claim four generations of our family at the same school.