on February 28, 2012
The second book I have chosen to read this year for my National Year of Reading challenge is Pure Cork by Michael Lenihan. 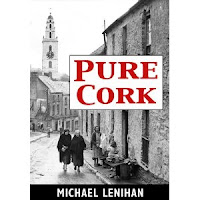 I saw this book advertised and immediately ordered it as I have ancestors who came from Cork. I didn't stop to think that the book might be about the city Cork and not the County. My ancestors Patrick and Hanora Flynn and their daughter Ann and her husband Thomas Moylan came from County Cork.

Pure Cork is a pictorial history of the city of Cork. Chapters include:


I was hoping to discover what life was like in Cork when my family lived there. As they left in 1821, 1824 and 1826, I needed fairly early references.  Although living in County Cork, I don't know if any of my ancestors actually went to the city of Cork. Who knows, perhaps they did?
So what did I discover?
It's quite likely that the Flynns and Thomas Moylan never went to Cork. I don't know how far they may have travelled. However, Patrick Flynn was tried in County Wexford and Thomas Moylan in County Limerick, so perhaps they did travel longer distances. I like to think that perhaps Hanora wore a shawl and that the images of shawlies in Pure Cork give me an idea of what she may have looked like.
I thoroughly enjoyed this book. Lenihan's collection of images paint a very complete picture of life in Cork. The back cover of the book advertises Hidden Cork. Looks like I'll have to purchase this book as well!
Ann Flynn Cork Hanora Flynn Michael Lenihan Patrick Flynn Pure Cork shawlies Thomas Moylan