on September 09, 2011
Although my children have purchased many an item from ebay in the past, until about 2 weeks ago I had never placed a bid.

However, something tweaked my interest. I have a google alert set up for Wallangarra, the small country town in Queensland where I lived until I was almost 13. Most of the alerts I receive are for house sales and the Riding and Pony Club with occasional football results.  But last week there was an alert for a postcard of the Wallangarra Railway station for sale on ebay. I just had to have it!

I was the only bidder for the Wallangarra Station - Border of N.S.W. and Queensland postcard so it was mine. It had never been posted. It has a squiggly line on the back which is definitely not writing. This is a shame as it would have been great to have identified the card with a specific family. Unfortunately, I also don't know when the photograph was taken. The only thing I can positively say is that my family lived there when the photo was taken. 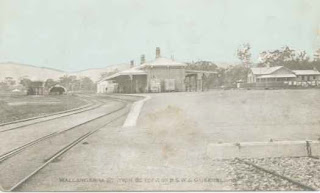 The only family member I believe who worked at the railway was my grandfather Jim's brother, Knox Moore. However, the railway line was significant for Wallangarra. It was the terminus of both the Queensland and the New South Wales lines and many men in the town worked for the railways.

My great grandfather Knox owned an orchard in Wallangarra and I have never thought of how he marketed his fruit. Two editions of The Brisbane Courier give me the answer. Knox Moore was described in The Brisbane Courier of 9th February 1929 as being a successful grower in Wallangarra. Others mentioned in the article included: Thomas McMeniman, Springborg Brothers, G and S Fletcher and H Brushaber. The second article describes the daily Fruit Train Service from Wallangarra to Brisbane. 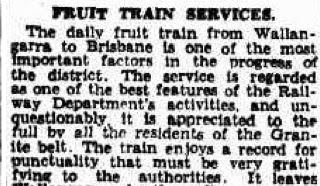 It was either a very early start to have the fruit at the station ready to leave before dawn or was it delivered the evening before? It seemed a long time to get to Brisbane - a journey of just under 300km. However, after collecting fruit from Wallangarra, the train would have stopped at Wyberba, Lyra, Ballandean, Glen Aplin, Severnlea, Stanthorpe, Applethorpe, The Summit, Thulimbah, Cottonvale and Dalveen for more fruit and vegetables and in this time had only travelled about 60km.  No wonder it took almost a day to reach Brisbane.

After my successful google alert, I intend to set up several more for other towns in which my ancestors lived. You never know what you might find and where it might lead you.
Brushaber ebay Fletcher genealogy google alerts Knox Moore McMeniman Wallangarra